It was William Kinsella, appointed bishop of Ossory at the age of thirty-three, who initiated the building of St Mary’s. His era in Ossory (1829-45) saw nineteen churches built, including the fine parochial churches of Ballyragget, Castlecomer, Freshford, Inistioge, Durrow and Lisdowney, two wings of the present St Kieran’s College completed, and a new cathedral begun. William Deane Butler, the architect for St Kieran’s and Ballyragget, was chosen to be the architect of St Mary’s.  His neo-Gothic style marked a new and ambitious phase in church architecture.  It set his buildings apart from previous ecclesiastical buildings in the diocese, and it reflected the new found confidence of the Catholic community.

Kinsella had already announced his project for a new Cathedral in February 1842 because St. James’s chapel had become “very old, very inconvenient and entirely too small”. The site chosen was Burrell’s Hall which housed the first Catholic college founded in Ireland after the repeal of the law against Catholic schoolmasters in 1782. Subscribers from St Mary’s parish pledged over £1500 including £100 from Bishop Kinsella and £20 from Fr Theobald Matthew who had once been a student of Burrell’s Hall. Money was also raised from door and street collections, from the sale of site material and from bank loans.  Work was begun in April 1843.  On 18 August the foundation stone was laid by Bishop Kinsella assisted by the administrator, Fr Robert O’Shea and others.  When Bishop Kinsella died in his fiftieth year in December 1845 the walls were only seven feet high.

The new Bishop Edmond Walsh aided by Robert O’Shea and a very active lay committee continued the project. They kept it going right through the famine years providing much needed work locally.  Collections were taken up in all the parishes of the diocese and bank loans were obtained on the securities of local merchants. The much publicised sermon of Dr Patrick Murray of Maynooth also helped to raise funds. The cost of the original building is estimated to have been £25,000.

For the grand opening admittance was by ticket only with prices determined according to where one was seated. Bishop Walsh began the ceremony of consecration on Sunday morning, 4th October 1857, at 6.15 a.m. and concluded about 9.00 a.m. The usual ceremonies accompanied the consecration – the procession three times around the cathedral, with hymns and the sprinkling of holy water, the knocking on the main door twice and finally the entry into the cathedral, the consecration of the high altar and the altar of the Lady Chapel and the deposition of the saints’ relics in the altars.  Twelve crosses which hung on each pillar along the nave were blessed and the bishop celebrated Mass in the Lady Chapel. The preacher for the occasion was the Bishop of Kerry, David Moriarty. Crowds flocked to the cathedral for the opening. The recently opened railway ran special trains and the C.Y.M.S did the stewarding.  In the evening there were solemn pontifical vespers.

The cathedral was described as “of pure Gothic design, built entirely of chiseled limestone and cruciform in shape”. The tower which has become a landmark of the city was originally designed for St. Kieran’s College, and rises to a height of 186 feet. The high altar of Italian marble was purchased in Italy.  The relics of Sts. Cosmos and Damian and St. Clement were brought from Rome. Those of St. Victoria came later. At its opening the Cathedral was like many of the churches at that time rather bereft of ornament.  A statue of Our Lady by Benzoni who sculpted the O’ Connell monument in the Irish College in Rome and the Bianconi mortuary chapel in Boherlahan was later commissioned by Bishop Walsh and stands in the remodeled sanctuary. The railings around the Cathedral were added in 1862.

During Bishop Brownrigg’s time a new sacristy and chapter room were added (the old sacristy was beneath the high altar) and many other improvements were made. The center porch and organ gallery were remodeled, heating was installed and new statues purchased. James Pearse, the father of Patrick and Willie, completed the marble altar rails and erected the altar to the Sacred Heart.

About £8,000 was expended and the refurbished Cathedral was reopened on 9 April 1899 in the presence of Cardinal Logue, Archbishop Walsh of Dublin, and many other dignitaries.

Less than thirty years later Bishop Collier found it necessary to do a great deal of work on St. Mary’s both inside and outside.  Turrets had to be repaired and a leaking roof overhauled.  Mosaic work and painting were done on the sanctuary and side chapels, pitch pine seats were put in the aisles and transepts, an altar was erected to the Little Flower, the organ was remodeled at a cost of £2,500 and choir stalls introduced.  The cost came to £28,000 and was raised by collections throughout the Diocese.

During Bishop Birch’s time the Cathedral was modernised to bring it into line with the requirements of Vatican II.  Under the great tower was placed a new high altar of polished limestone surrounded by copper relief’s depicting scenes of church life in Ossory.  Many other changes were made including a new tabernacle to facilitate exposition of the Blessed Sacrament and what is practically a new organ constructed by a distinguished German organ builder.

Bishop Séamus Freeman, SAC, commenced the present phase of work of renovations to  the Cathedral in 2011 when the sanctuary mosaics and Cathedral windows were cleaned and restored, offering for all who entered the Cathedral the wonderful vista of the Apse behind the Sanctuary and Altar which is so prominent today. This work helping to immediately draw the eyes of all who enter to pray towards the sanctuary which is the heart of any church. Also during these years of works undertaken by Bishop Séamus a chapel to the Blessed Sacrament was created in the basement of the Cathedral along with works to bring to life a Cathedral cafe and the Cathedral bookshop which still serves the Diocese today.

In January 2019 Bishop Dermot Farrell continued this work when he invited liturgical architect Paul O’Daly to visit the Cathedral.  Paul, a native of Dublin, has vast experience in the design of several new churches and in the restoration and reordering of many churches and religious houses in Ireland and as such brought an understanding of liturgy and the concept of ‘sacred space’, including the interaction between language, ritual, and the appropriate furnishing of a church.  Paul met with local architect Brian Dunlop of Kilkenny and together they began the plans and the design process.

This important work was continued by Bishop Denis Nulty, Apostolic Administrator of Ossory following the translation of Bishop Farrell to Dublin. Since that time a new Altar and Ambo were crafted and installed – they are the work of Mr Thomas Glendon and his son Philip. Thomas is a renowned Irish craftsman specialising in sculpture, letterform, ecclesiastical work and design in stone, wood and bronze. St Mary’s Cathedral is the second cathedral where Thomas’ work can now be seen; he is also the sculptur of the new Altar in St Mel’s Cathedral in Longford. Thomas visited St Mary’s numerous times and took his inspiration for the new Altar and Ambo from the curves and designs of the magnificent pillars of the Cathedral.

Sunday 27th March 2022 was the day that Bishop Denis consecrated the new Altar and blessed the new Ambo and the associated works as part of another wonderful addition to the ongoing life of improvements of the most sacred space that is St Mary’s Cathedral. The Cathedral still dominates the landscape of Kilkenny, its great tower being visible from all approaches to the city.  It stands as a reminder of the faith and growing confidence of a far-off generation – a reminder and much more than a reminder. 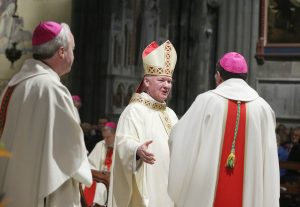 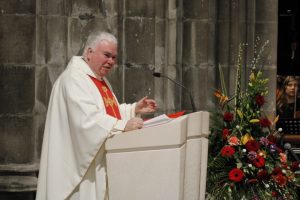 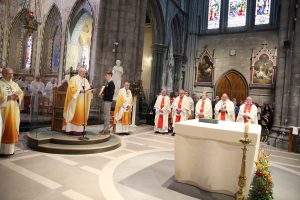 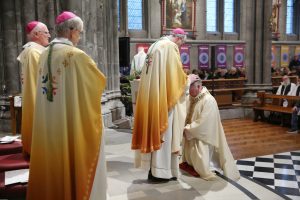 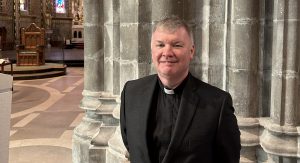